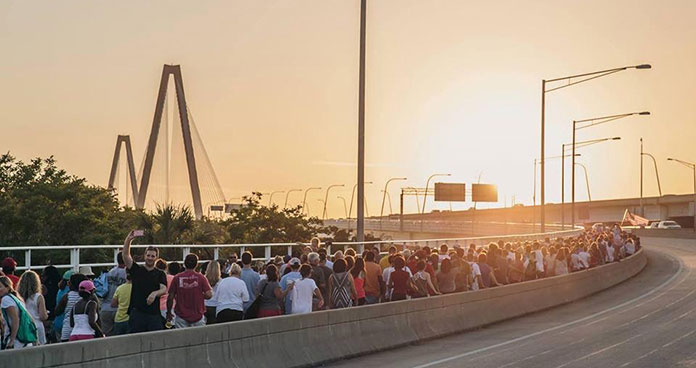 On Sunday night, I was one of the almost 20,000 who walked the Ravenel Bridge in support of Emanuel AME Church as we remembered the nine people who were murdered this past Wednesday night, June 17.

It was a wonderful display of a community coming together. I was honored to be in attendance. Here are some thoughts:

All men are made in the image of God; therefore “every person of every race possesses full dignity and is worthy of respect and Christian love.” (Baptist Faith and Message 2000, III)

Adolf Hitler would have scoffed at the above statement. So would Slobodan Milosevic of Serbia as he participated in the “ethnic cleansing” of Bosnians (1992). The Hutus would have considered the statement on the dignity of man to be nonsensical as they killed 800,000 Tutsis in the Rwanda genocide of 1994. But every child of God understands that every man possesses dignity because men, women, boys, and girls are made in the image of God. This truth is etched upon our hearts by the power of the Holy Spirit. To mistreat a person based upon one’s ethnicity is a grave sin against the character of a holy God. We must oppose every vestige of racism in the name of Christ. And that involves any racism in my heart.

2. The cross of Christ obliterates the dividing wall between races.

“14 For he himself is our peace, who has made us both one and has broken down in his flesh the dividing wall of hostility 15 by abolishing the law of commandments expressed in ordinances, that he might create in himself one new man in place of the two, so making peace, 16 and might reconcile us both to God in one body through the cross, thereby killing the hostility.” Ephesians 2:14-16

Note the phrases “broken down in his flesh the dividing wall of hostility” and “killing the hostility”. Christ is our peace; he is the one who reconciles.

3. I walked with my fellow citizens on Sunday night. It was a sober, reflective, and boisterous time. The Baptist Faith and Message 2000, XV. The Christian and the Social Order states:

“Every Christian should seek to bring industry, government, and society as a whole under the sway of the principles of righteousness, truth, and brotherly love. In order to promote these ends Christians should be ready to work with all men of good will in any good cause, always being careful to act in the spirit of love without compromising their loyalty to Christ and His truth.”

I was walking with men and women of good will and gladly participated.

But I cannot help lead an “interfaith prayer gathering” because there is only one Mediator between God and man – the man Jesus Christ (1 Timothy 2:5). And I can draw near to the God who is only because of the work of Christ on the cross (Hebrews 4:16). To go to a gathering where one participant begins his prayer by saying: “There is no God but Allah and Muhammad is his prophet” and another would solemnly evoke: ‘I pray according to the manifestation of supreme teachings in the Baha’i faith” and another chant, a Hindu mantra in the name of Vishnu or Shiva, is to seriously compromise the uniqueness of the Lord Jesus Christ.

The strong and glorious reality of Christ is my most compelling motivation.

4. I am enormously proud of my city. The AME church has been a shining light. Our leaders have spoken with thoughtful dignity and the city has shown solidarity, mercy, and kindness.

May the Lord bless our city as we pray for the outpouring of the Holy Spirit in our lives and in the life of our city, nation, and the world.