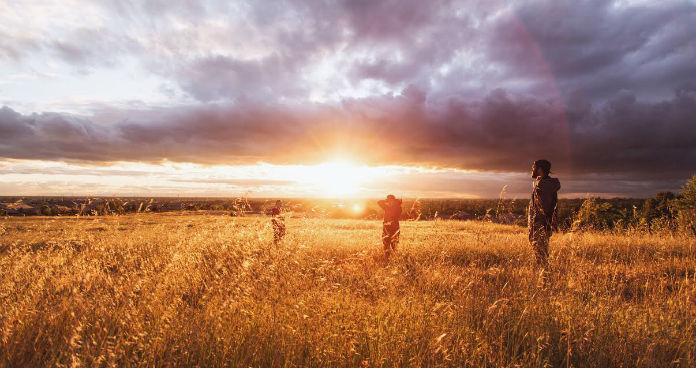 On August 7th-9th our High School Ministry hosted the annual “Operation Freshman” weekend retreat. The retreat is rare because it is attended only by rising 9th and 12th graders and is meant to be an opportunity for the seniors to welcome, think for, and serve the upcoming freshmen class. While the weekend is characterized mostly by fun and ridiculous games, it is also a time for intentional worship, teaching, and discussion.  Over the course of the weekend, I spoke primarily on misconceptions with identity and finding our true purpose and self-worth in who Jesus is and what He did on the cross.

But as I spoke to this specific group of students who were respectively entering and exiting high school, I was reminded that some of their struggles with identity and acceptance were issues that do not vanish upon receiving a high school diploma. They are issues that we (as adults and believers in Christ) will continue to deal with year after year. When we forget that we have been crucified with Christ and it is no longer we who live but Christ who lives in us,(Galatians 2:20) our identity becomes murky and our image becomes blurred.

Here are three misconceptions of identity we need to stay aware of:

Namely, what you look like. When God sent the prophet Samuel to find and anoint the next king of Israel the LORD said to Samuel, “Do not look on his appearance or on the height of his stature, because I have rejected him. For the LORD sees not as man sees: man looks on the outward appearance, but the LORD looks on the heart.”(1 Samuel 16:7) We, however, tend to focus on the outward appearance. We place a priority on looking younger, fitter, and more attractive. We subscribe to magazines, meal plans, and workout regimens all promising a better version of ourselves. Sometimes we don’t even realize we value appearances. Since 1916 there have been twenty-five presidential elections and only six of those elections were won by the shorter candidate.  Just like Samuel, we look first at attributes such as height and build when the Lord is much more concerned with the stature of our heart.

This misconception is much more subtle but operates like the carrot on a stick. We believe that the more we can achieve professionally or personally, the happier will be. But when we become defined by what we have done we not only live in the past but also struggle to find hope in the future. The average retirement age for an NFL athlete is 35 years old. Average life expectancy for a man in the US is around 76. This means on average, retired football players have four more decades of living. Some get into broadcasting or coaching but for the majority of these retired athletes there is a future absent of football.  From Pop Warner to the pros, football had been the primary aspect of their identity – it had who they were. After retirement, what do they look to for purpose?

The desire to be liked may originate in the teen years but it is something we must deal with throughout our lives. Galatians 1:10 clearly says “For am I now seeking the approval of man, or of God? Or am I trying to please man? If I were still trying to please man, I would not be a servant of Christ” suggesting that it can only be one or the other. Fight for the approval of man or find that through Christ we have been loved and accepted by God. The misconceptions with identity vary slightly but share a common aspect: they are all based on how others perceive us and not how we have been created (ie. in God’s image). Pastor Eric Mason argues that “Identity has become an artistic creation of man’s choosing. In this line of thinking, who you are is based on personal wish and desire as opposed to being rooted in the image of God.” (Eric Mason, Manhood Restored)  When we forget that we have been personally and purposefully created by the living God, we become subject to the whims and desires of other people.

King David was characterized as being “a man after God’s own heart.”(1 Samuel 13:14) Considering his track record, this is a pretty amazing thing to be remembered for. Not adulterer. Not murderer. But a man who loved the things the Lord loved. That is what defined David more than anything else in his life. If we were to play a game where we named a famous person and tried to describe them in one or two words we would probably come up with similar answers. George Washington…president…LeBron James…basketball…Bill Gates…Microsoft. But what about you? What one or two words would you use to describe yourself? What one or two words would those closest to you say? Who are you? Is your identity and self-worth found in something like what you look like, or what you’ve done, or what people think of you? Or, is your identity (and purpose and hope and joy) rooted in the image of the living God?

AW Tozer says that “What comes to our minds when we think about God is the most important thing about us.” What comes to your mind?